Radios: Reviews of newer equipment and a look at some old receivers ... 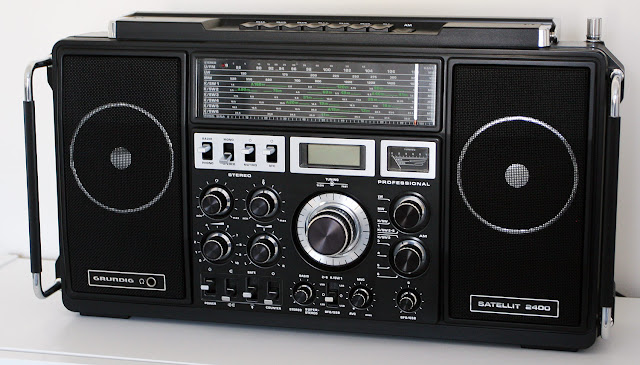 The Grundig Satellit 2400 was made from 1979 - 1982 and is an all transistor stereo receiver that can be operated from the internal mains power supply, with batteries or with a rechargeable unit.
The dimensions of 59 x 29 x 12 cm make it one of the biggest radios made by Grundig and without batteries, it weighs around 7.4 kg .
I found this example a few months ago. As far as I can make out, everything works well, although the bass has a tendency to distort if the control is turned too high. I gather this is a known problem with some of these sets. Otherwise all the lights work, the controls are all in place and it is clean and tidy. The aerial is intact and straight.
The Medium wave section works well and seems sensitive. The MW sections tunes up to 1638 kHz on this set and uses the ferrite rod at these frequencies. (Useful for Dutch free radio stations). The SW section tunes from 1620 kHz on the telescopic rod antenna. The SW is about the same as other sets that I own, although the aerial is a whopping 1.4 metres long and that helps to pull in the distant stations!.
SSB can be clarified with the BFO/SSB control, but this is not especially stable and tends to drift a little. I wanted the set to listen to broadcast stations anyway.
FM works well and the set has a good sound if the bass is kept under control. The front of the radio includes a large analogue display and a small digital readout (which seems quite accurate). The tuning control features a larger quick tune rotary knob and in the centre is a dial for fine tuning.
There are plenty of controls to keep "button-twiddlers" happy and there are even some controls around the back of the unit. The rear has 6 preset buttons to tune in and store FM stations and a trimmer for an external antenna. 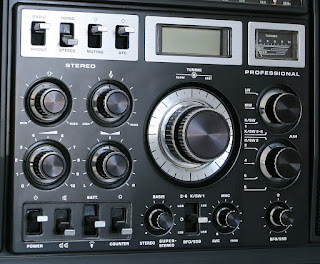 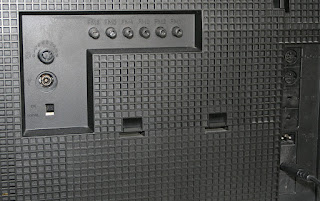 Is this one of the "prettiest" radios ever made? 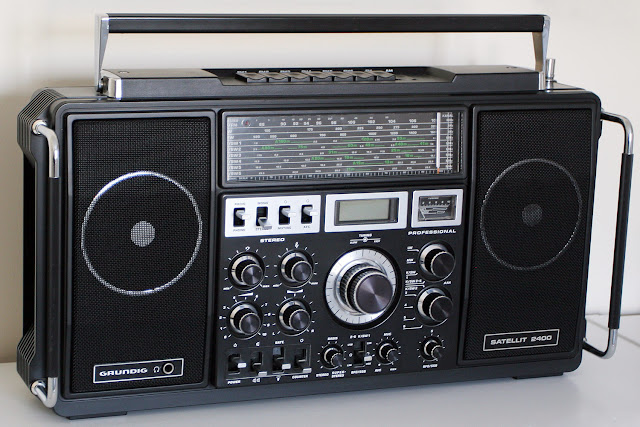 I do not know what happened to it, but I think it broke or I dropped it, or similar. I had always enjoyed using the radio and I found this Tatung (another Sangean ATS-803 clone) on a well-known auction site for £40.00. It is in good condition and is working perfectly. 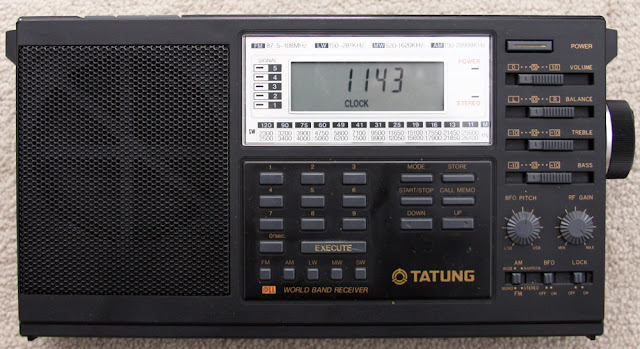 Just as I remember the radio, the dial on the side is pretty hopeless; it does little except jumble up the frequencies. I find the up / down buttons on the front panel much more accurate, or of course, you can dial in the frequency using the number keys.

On the front there are also buttons for FM, AM, LW, MW and SW. The short wave button allows scanning up and down the shortwave bands, ie. 49, 41, 31 metres bands etc.

There is a narrow / wide bandwidth filter, which is maybe a bit too narrow, but it does allow for accurate tuning.

There is also a BFO switch for listening to SSB (or CW) and this works surprisingly well, allowing SSB to be clarified nicely. 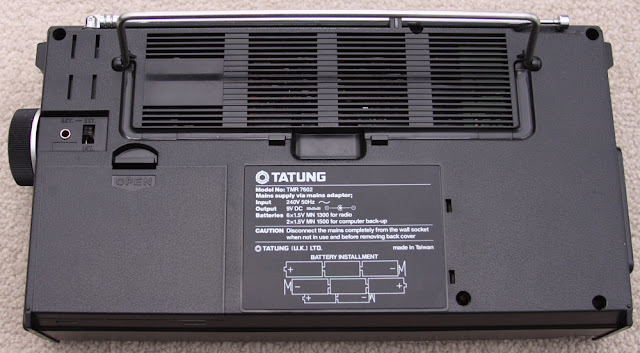 On the rear is an antenna switch - internal / external and a 3.5 mm jack socket to allow connection of an external antenna.

The AM section is reasonably sensitive and works well on the shortwave broadcast bands. I can listen to the 48 and 43 metre free radio frequencies with good reception of strong stations indoors.

FM is sensitive, allowing me to receive middle distance FM stations locally with the rather long telescopic antenna. 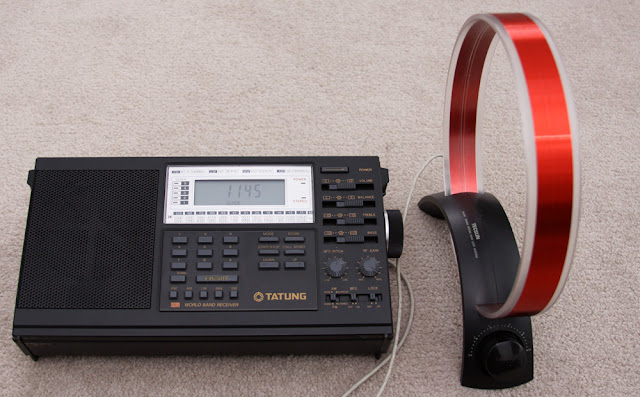 The bonus for me, and the reason that I like this radio, is that I can set the antenna switch to external and connect the Tecsun AN-200 loop antenna, allowing reception of MW stations above 1602 kHz. I am able to receive free stations from NL, using this combination.

On the side there is also a DIN socket (remember those?) for recording, a headphone socket, (which allows FM stereo to be heard) and a socket for a 9v DC adapter, which was included in the price. The only thing missing was a shoulder strap (no big deal!)

All in all a good radio, and a useful addition to my collection of shortwave radios! Now for an ATS-909.....

Bass, treble and RF gain controls are separate, as are narrow / wide filter for AM and a stereo / mono control on the same switch. The narrow / wide filter does not seem to greatly affect the received sound.  I have not played with the memories yet, as I rarely use these on any radio I own. The radio has a Q.Tune feature which works well and jumps to the next shortwave broadcast  band. There are also up / down buttons to help with scanning through frequencies. Batteries are either 4 x D cells or 4 X AA cells. I am not sure how long the D batteries will last and I have not tested the radio on AA cells. The mains adapter works well, and so far I have not detected extra noise from the power supply in the adapter.

On the side of the unit, there are switches for Key Light (on / off), AM Sensitivity (Distant / Local) and FM/SW Antenna (Internal/External). The Distant switch reduces gain by a useful amount. On the other side is phono line out for stereo (L/R) and Battery switch (AA/D) and DC in socket. On the back are sockets for antennas (coaxial in for FM and Antenna in andground for SW) and an IF output socket (again coaxial).

Annoyingly, at first, I found the radio reads around 1 kHz low. For example Radio 5 on Medium Wave is 909 kHz, but the K-Po records a centre tune point of 908 kHz. From what I read, and after speaking to David of Wizard Radio, I gather this is common on examples of the radio. This is older technology - analogue RF circuits with an add on synthesiser. I seem to recall that a Sangean ATS-803a that I had some years ago, had a similar problem. Anyway Medium Wave sounds better with a 1kHz off - tune! 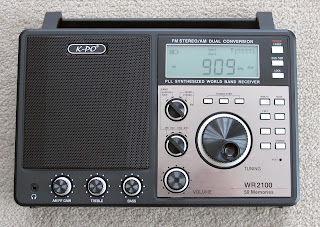 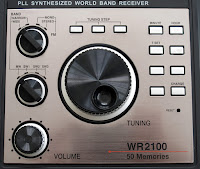 Less of the details; how does it perform?

Well, very well, in my opinion. The Medium Wave section is sensitive, more sensitive than my Tecsun PL-600 and better than most of the other analogue radios in my possession. All stations I would expect to hear on MW, like Smooth, BBC local radio and Radio 5, Talksport, and Virgin come in clearly and moreover, the radio has a good sound. In conjunction with the Tecsun AN-200 loop antenna I listened to Calimero on 1638 from the North of Holland as if it were a nearby station. (see video clip - https://youtu.be/PwJae6LEN3k). This was the main reason I bought the set because I had heard of its capabilities on MW.

It is on Shortwave that I was surprised. This radio pulls in "Free" radio stations that I cannot hear on the Tecsun. For example, I could just hear GSV one evening on 6401 with the telescopic antenna (by a window), that was also weak on the outside antenna on my Icom. Rode Adelaar (Video clips - https://youtu.be/DH3ydLfE-30, and https://youtu.be/AVWyEG7-SMw) and Paardenkracht (Video clip - https://youtu.be/r-KFRimhYtc) came in clearly also.
FM seems clear and again as sensitive, if not better than other portable radios I have. Certainly the sound is superior. I cannot vouch for overload problems as I am not close by a FM transmitter. The nearest to me is under 10 miles, but is not massively high power.  But, again, I did not buy the radio for FM.

All in all, a useful addition to my collection! I look forward to taking it on holiday with me.

MW/LW/SW AM and 76 or 87.0 - 108mhz FM Also covers 9/10 khz MW frequency gaps and temperature display in degrees F/C. The temperature display is linked to the frequency gap in that the Fahrenheit setting works with the 10khz (USA) MW setting and the Celsius with the 9khz (Europe) MW gap. The "High Sensitivity AM Antenna" really does make a difference to the MW reception and can null out an interfering station on the same channel effectively.
FM is good though and sounds especially nice with the enclosed headphones.There is an antenna cable, a small manual, an attached belt clip and a light carry case to complete the package. The radio can be charged (if it has rechargeable batteries) with a standard USB cable (not included). 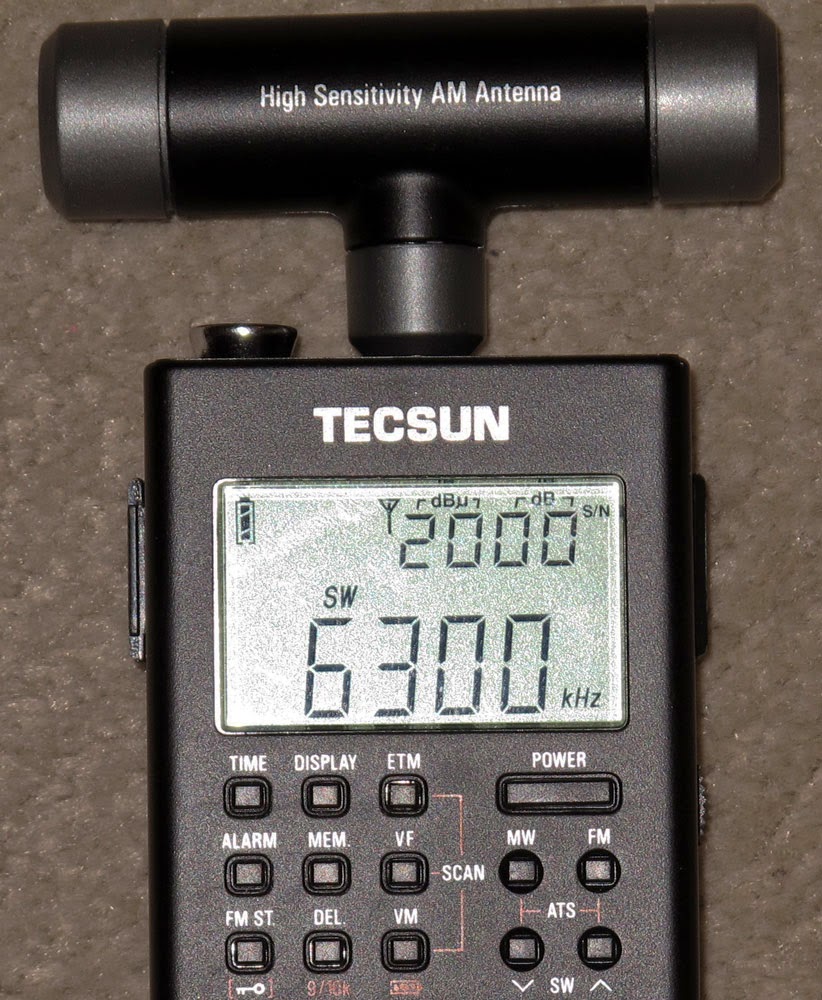 I ordered this small portable to take walking with me.The reception on the 48m band is roughly same as on the Tecsun PL-600, although much tinnier in sound. It all seems a good value package for £28.50 (on a well known auction site). 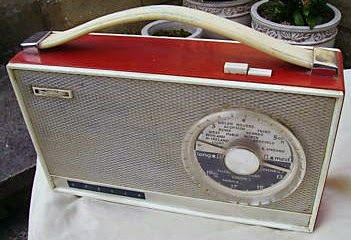 Oh, to find one of these on EBay! 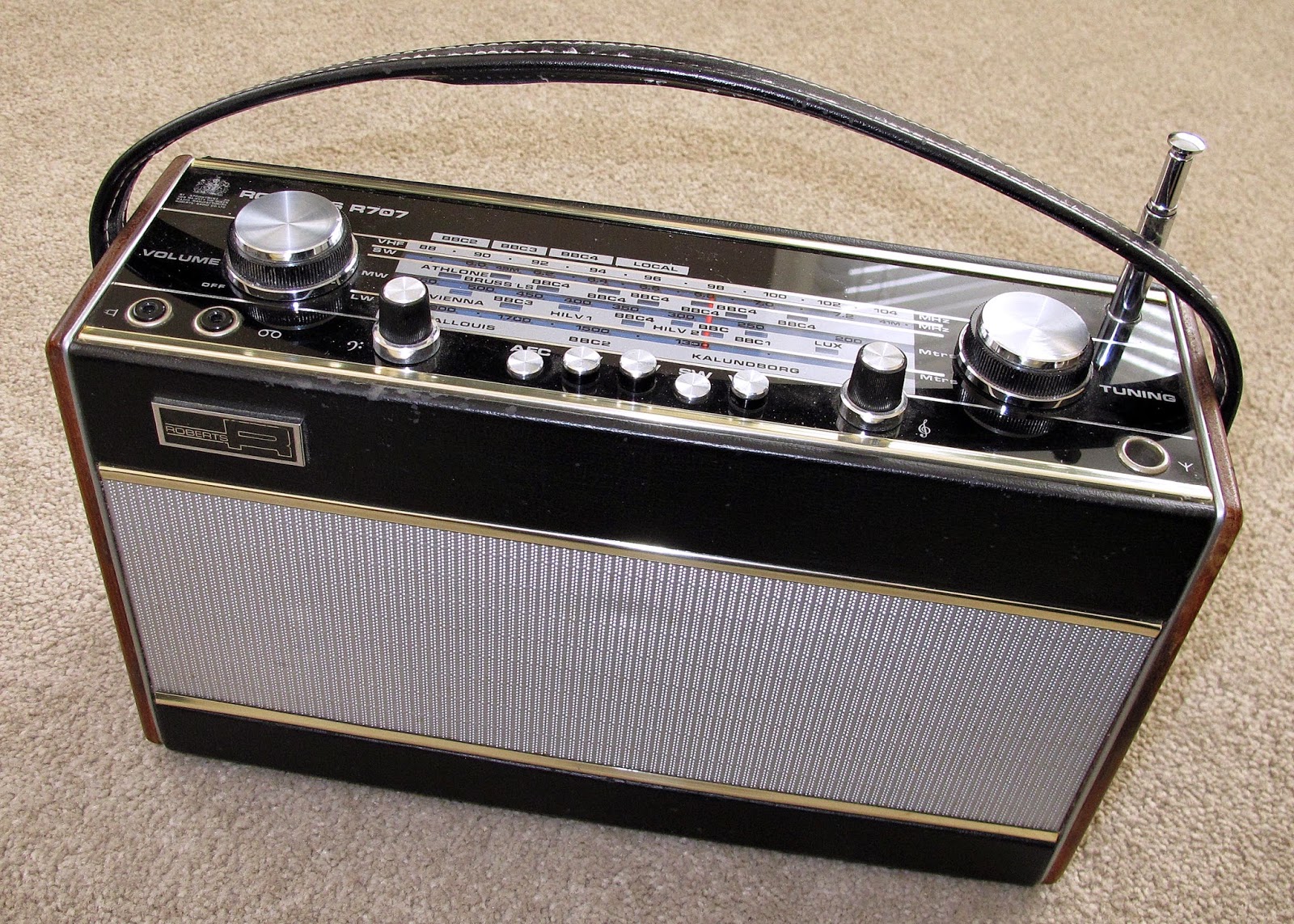 The Roberts R707 was first produced in 1969. It was Roberts attempt to meet the competition from the Hacker Sovereign.
The R707 was known for its good bass "tone", low battery consumption (it takes 2 x 996 batteries, still available) and the fragility of the IF module! The one pictured, for example, works well on MW, LW and VHF, but not a peep on SW (49m band only).
Nonetheless, a great old radio; I bought one originally in around 1969, but returned it to the retailer, because the dial cord kept sticking and slipping! 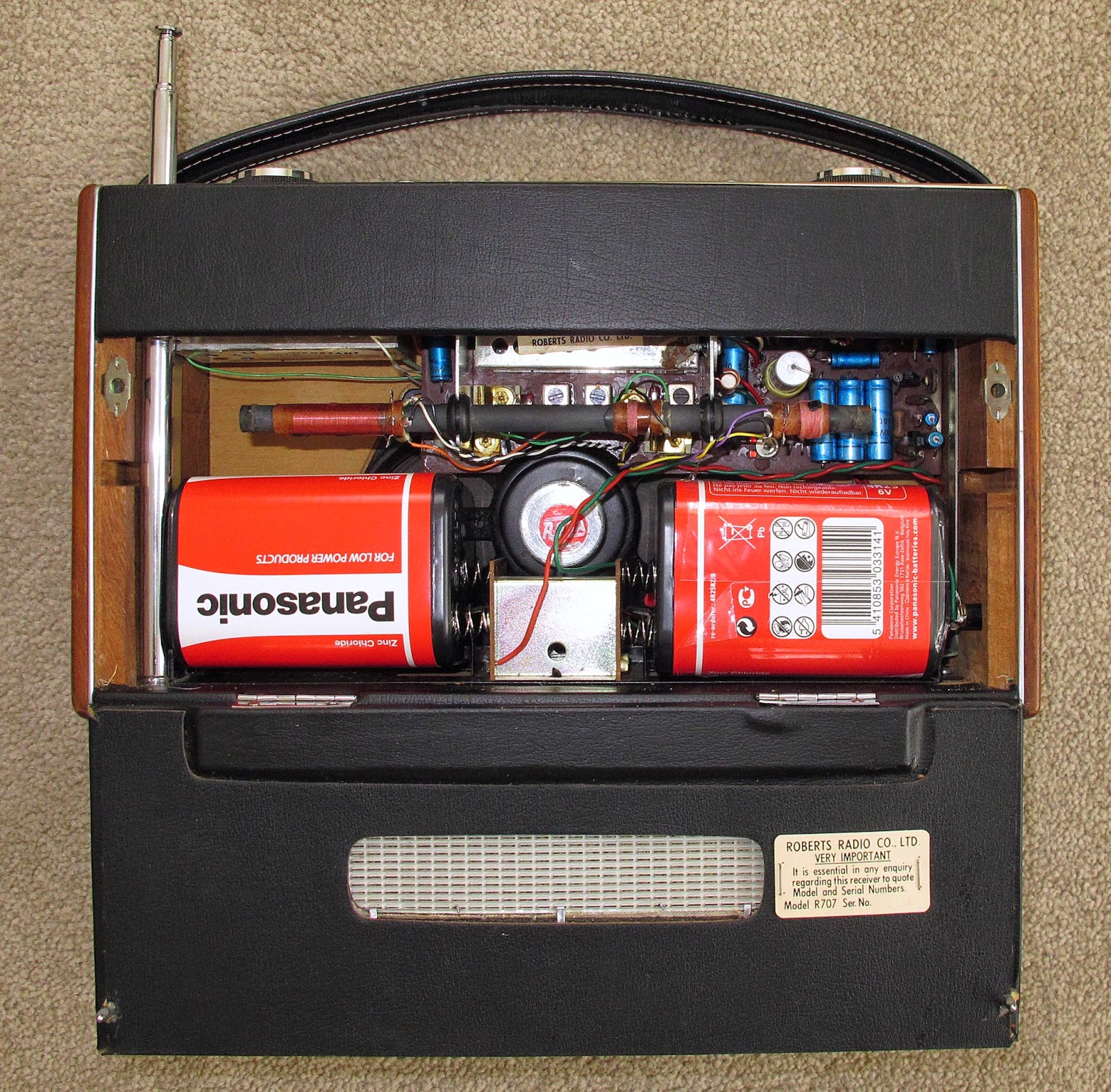 The rear view showing the large 6v batteries and a reasonable sized ferrite antenna. I have adjusted this for maximum gain across the MW and LW. The speaker is a Rola (Celestion) of dimensions 7 x 4 inches and the audio output is 1.5W. 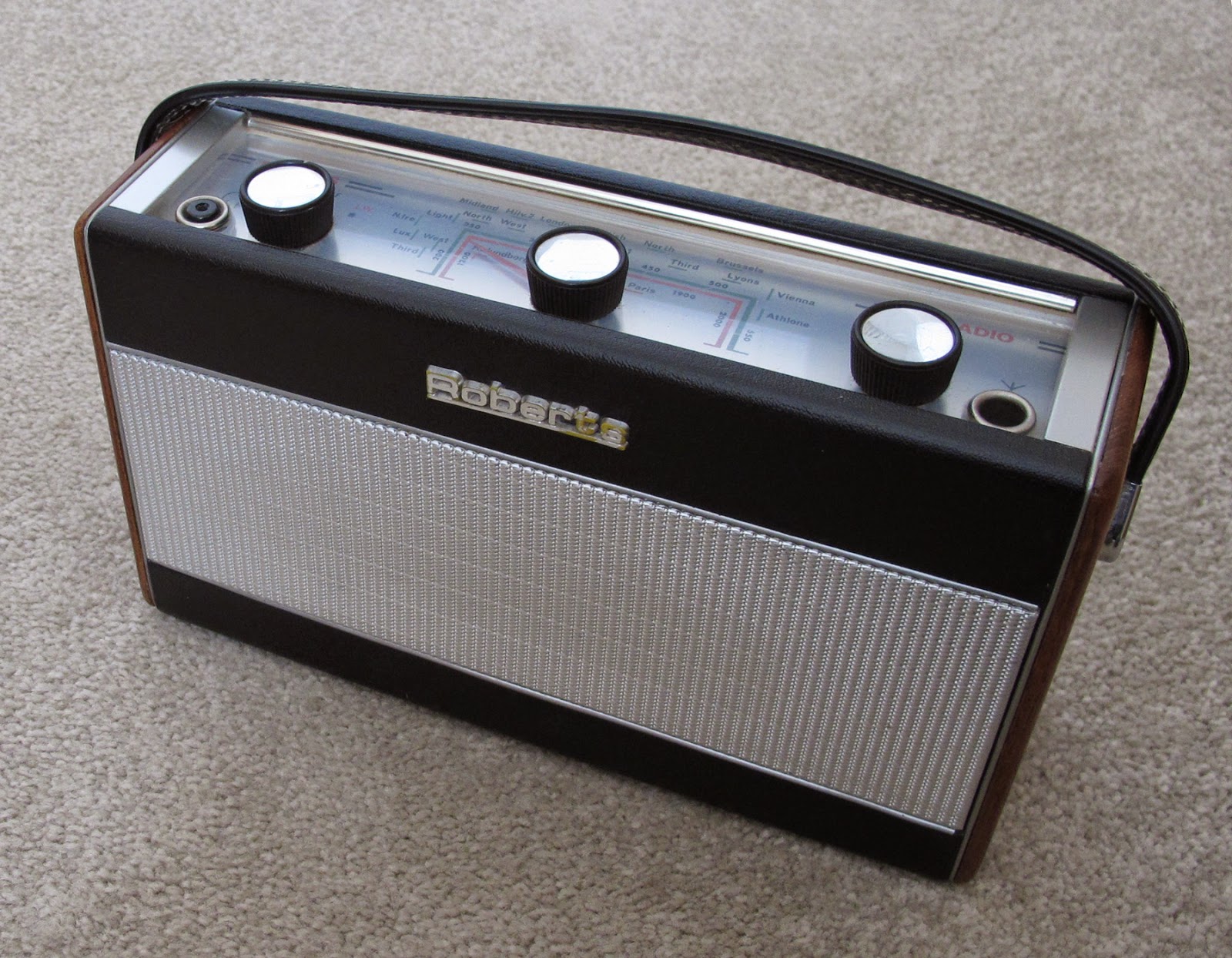 The Roberts R303 radio was made in England and covered the Medium and Long wavebands. It packed a large loudspeaker, and was powered by a PP9 battery. It was designed to be especially sensitive on LW.
The R303 was released in 1967 and I bought my one in 1968. The price was around £16. The one photographed I purchased on EBay.

I have adjusted MW so I can listen above 1620 khz for pirates. It now receives to around 1680 Khz. 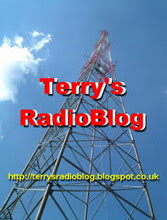 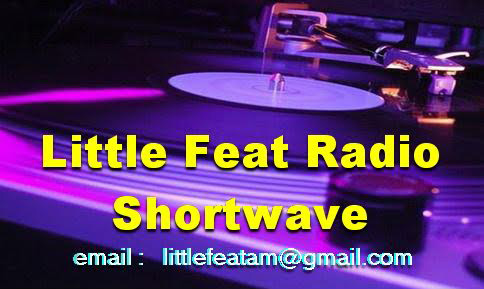